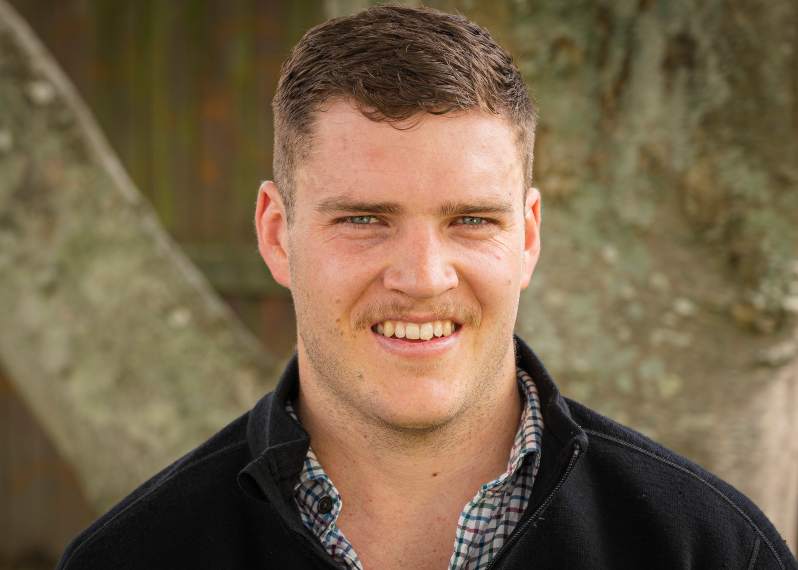 Perrin Ag’s newest agribusiness consultant is taking a coaching approach to his role, as he hangs up his footy boots to work alongside farmers and help their businesses thrive.

Morgan Inness (26) grew up on a lifestyle block just north of Whanganui. After school, he took a gap year as a teacher in England before completing an Honours degree in Agricultural Science from Lincoln University.

Morgan’s talent for rugby then took him to Russia, where he played the sport professionally, followed by a stint at semi-professional level in Scotland. It was during his time in Scotland that he started working as an agricultural consultant. More recently, Morgan played rugby back home for Hawke’s Bay.

One thing his sporting career has taught him is that success happens when there’s a genuine partnership between people.

“With farming, it’s no different,” he says. “We can figure things out together and bounce ideas off each other. That’s why I think ‘coaching’ is a powerful way to describe what I do.”

While Morgan’s official title at Perrin Ag is “Consultant”, he sees himself as more of a coach. From his time in rugby, he knows that the people who matter most are the ones on the field making things happen. He believes the coach’s job is to guide and mentor.

“In the past, a farm consultant was expected to know all the answers. And back then, they should have known, because farming had largely remained the same for 10 to 20 years. But now, there’s so much rapid change and it’s all new to consultants and farmers alike. My first job is listening, then coaching.”

Such an approach may well prove the difference as pressure mounts within our primary industries. While Covid-19 has changed the landscape for everyone, farmers must also contend with a raft of new environmental regulations and public perception pressures. Morgan understands the implications for mental health are real.

“I get it. Being forced to change can be daunting. Many farmers are struggling. Some will tell you what they’re battling with straight away and how they need help, but many won’t. My job is to listen and understand why they do certain things. If I’m going to be useful to them, I have to start there.”

By his own admission, Morgan is something of a hybrid. On the one hand, he loves the land, but he also has a fascination with the business side of farming.

“I’ve obviously done a fair bit of practical work growing up. I was always outdoors, either on the farm or hunting and fishing somewhere. Even during school holidays, if I wasn’t working at home, I found jobs on other farms in the area.

“But what I really enjoy is the in-depth side of farming. What really drives me is helping someone achieve their goals within their farming business. That’s what gets me out of bed in the morning.”

Feed conversion efficiency is a specific area of expertise for Morgan and was the topic of his university dissertation. It’s also a hot topic in New Zealand’s agricultural sector as we look for ways to produce more from less.

Having worked in the UK, Morgan has an understanding of intensive livestock systems where arable crops are used to feed sheep and beef livestock.

“I realised that this type of intensification doesn’t make a positive difference to farmers’ bottom lines. I’m pretty proud of the commitment New Zealand farmers have to using pasture-based systems.”

In learning about maximising crop yield, Morgan has come full circle. Lucerne was part of his dissertation study and a crop familiar to the wider Perrin Ag team.

“I’ve got a good handle on how lucerne grows and how it needs to be managed and grazed. There is a fair bit of lucerne around, which is good, but it must be treated differently to a normal rye grass pasture.”

Morgan is adamant lucerne has a crucial role to play in the future of New Zealand farming.

“Lucerne is pretty hardy. It has a tap root which can often reach depths of 2 meters plus, which is important. As our climate gets drier, farmers are looking for pastures they can use to finish lambs or beef animals. A crop like lucerne is perfect because it’s one of the best drought-tolerant feeds around that you can get good liveweight gains on.”

For every farmer, the harsh reality is that change will continue to come. Like many industries, agriculture is in a state of flux, which demands high levels of business agility. That’s not easy, but it’s where Morgan performs best.

“I think the key is looking for opportunities within the changes. My role is to be at the forefront of any regulatory or scientific shift, so I can break it down for farmers. Then we can work out a plan together to make those changes work for them.”