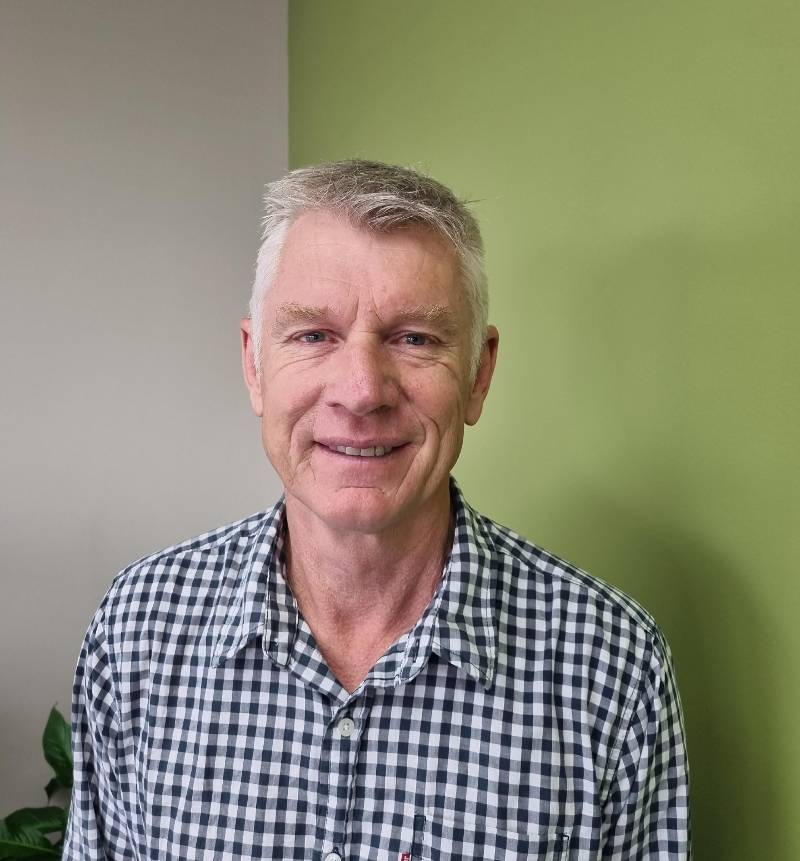 Experienced dairy industry professional Rob Brazendale has joined Perrin Ag as the firm looks to strengthen its support of farmers and growers in the Lower North Island.

With over 30 years in the agricultural sector, Rob knows how to navigate farmers through the regulatory maze. As Perrin Ag’s newest senior consultant based in Palmerston North, he is in a unique position to help farmers more than ever.

“I’ve been in agriculture a long time and my work has been varied: farm advisory work, farm management research, rural banking, and dairy farm systems development. I also run a lamb and beef finishing operation in the Manawatu. So, I have a good understanding of farming, from milking cows and shearing sheep to the regulatory process in Wellington,” Rob explains.

“I enjoy working one-on-one with farmers, but I’m more useful in a role where I can help shape the policies that affect farmers throughout the country. That’s what I’m looking to do with Perrin Ag.”

Rob joined Perrin Ag from DairyNZ where he was regional leader for the Lower North Island. He was aware of the work Perrin Ag was doing, and the broader services the firm was offering farmers and growers. He sensed his agricultural knowledge and experience could be fuller utilised within the Perrin Ag team.

“Two things made working with Perrin Ag attractive to me. First, it has a large, multi-disciplined team. That’s hugely valuable in terms of creating opportunities to collaborate with a group of people who have a wide body of knowledge. I also felt I could make more of a difference to farmers by working with a great line-up of people like that.

“Bigger teams tend to pitch for bigger work, like projects from government agencies and NGOs. That’s policy level stuff, which is where I believe my 30 years of experience in diverse roles can help shape things.

“The Government wants to implement changes for the good of the environment and our country. I know some of the people at that level – I’ve worked with them before – and they really are toiling with good intentions. The challenge they face is understanding how their policies impact the wider farming system.

“Here’s an example. When a government ecologist looks at a freshwater situation, they’re seeing the issue almost exclusively through that ecological lens. Which makes sense. What they often don’t see are the domino effects their proposed changes could have beyond the immediate freshwater issue. That’s what frustrates farmers – when well-meaning policies are unworkable or make farming less competitive.

“Part of my job is to bridge the gap between these worlds – to bring the on-farm perspective into the policy-making room, and vice versa. If that can be done, the environment can be respected, and farming can be sustain its profitability. New Zealand needs both.”

“Rob will be instrumental in helping us grow our business in the Rangitikei, Manawatu and Hawke’s Bay, so farmers and growers in those regions can reach their full potential,” he says.

“He will also be an asset to our firm as a mentor to our growing team of rural professionals and as someone with strong banking and industry connections.”

Rob’s track record and experience will be important as Perrin Ag competes for Government and NGO projects. While he acknowledges that other successful players are pitching for the same work, Rob believes Perrin Ag has an advantage in Wellington.

“When Government people are given pitch proposals, they’re now asking, “What does this mean on the farm?” That’s a good question and some of our competitors struggle to respond with real-world answers.

“Maybe they’re an economic research company that specialises in desktop analysis. They’re good at sourcing data and forming conclusions, but they’re unable to consider the implications of those conclusions on the ground. How could they? They’ve never farmed. Many don’t even know farmers.

“That’s where my strengths lie. I know the world of data and research and finances, and I know farming systems inside out. Farming is more than just desktop numbers and tidy conclusions. Perrin Ag understands this, which is valuable to the agricultural policy makers.”

Rob has clear ideas on the challenges that are on the horizon for New Zealand farmers.

“The next thing that’s coming is the change in focus from animal welfare to animal care. Animal welfare is about helping livestock when things go wrong. Animal care is making sure we have the systems to prevent things going wrong in the first place.

“Lamb docking is a good example. Farmers used to dock to a much shorter length, but that led to problems – the sun would bake the exposed nether regions and flies had easy access. Now farmers are required to dock at 3-4cm. That simple change makes it easier for the animal to protect itself.

“After care will come animal comfort. That involves things like providing adequate shade and shelter. Some farmers are already making it a priority, which is important given the increasing weight it’s carrying with consumers. They want to know the backstory behind their food choices, which they can get simply by scanning a barcode. Every farm’s processes and the quality of each animal’s life will come under more scrutiny in the future.

“It’s an ever-changing world for our farmers. It’s not easy. But we can help coach them through the maze. That’s my job. It’s why I joined the Perrin Ag team.”